We’re back with the second part of our Let’s Play in Dear Esther to kick off the new year! Check it out here. 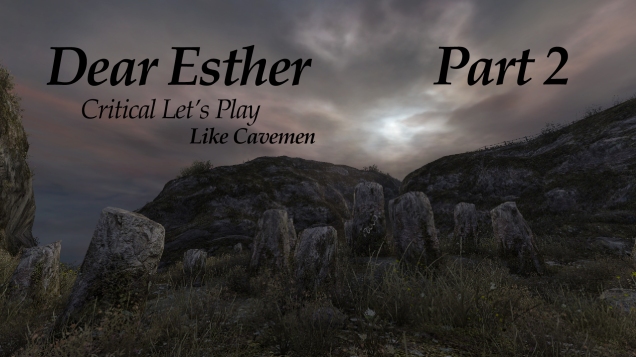 Hey, everybody!  I’m trying out a new format for analyzing video games with this critical Let’s Play.  For a while now, I’ve felt that video is much more suited to analyzing games and I hope you all will agree!  I decided to return to the Chinese Room’s masterpiece, Dear Esther , because it’s so dense and there’s so much to say about it.  I’d love to take this as an opportunity to talk about the game with all of you, so feel free to leave a comment and start a discussion!

Though it is clear that the gaming community is growing more and more accepting of art games, it seems that there is still a pervasive view that their status as games is debatable. While they obviously break from a standard form in games, that does not change the fact that, of the main types of media (aesthetic art, theater, literature, music, movies, video games, etc.), they clearly fall under the category of video games. For all intents and purposes, they are merely Modernist games.

One of the main roots of this debates seems to be in a fundamental disagreement about what constitutes a video game. With the most avant-garde games like Gone Home, The Stanley Parable, and Dear Esther, the most overwhelming complaint seems to be that there are not enough buttons. The four arrow keys and an occasional click do not create a sufficiently interactive experience to call it a game. However, the major flaw in this logic is that interactivity is still heavily required. These are not movies in which you can only change the camera angle; the player must knowledgeably interact with their environment to move the narrative forward. 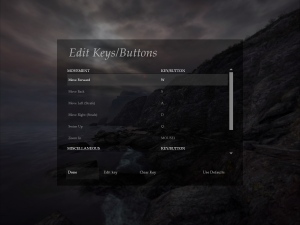 A counterargument to this is that they should not be called games but rather “interactive narratives” or “interactive experience”, but this idea is flimsy at best. Where do we now draw the line between games and interactive narratives? Do not the majority of mainstream video games contain narratives that the player interacts with? Take Call of Duty for example. The game relies on a plot (albeit a weak one) to give the player’s actions meaning in all of the campaigns. If the player felt no sense of progression in story, they would quickly bore of the experience.

What could differentiate these games so much that there is such a disparity in arguments over their statuses as games? The answer is simple; the average gamer likes Amnesia better. That is it. What Amnesia lacks in controls, it compensates for in a more appealing narrative to the majority of the gaming community. Other than the type of narrative (horror versus drama), there are effectively no differences between Amnesia and Gone Home. In fact, Gone Home seems to flaunt this by creating the same suspense and atmosphere as the average horror game.

Frictional Games has pointed out that Gone Home was even originally made in the Amnesia engine.

This is where the modern (or, if you prefer, “Stanleyist”) view on gaming comes in. The psychological concept that perception is reality is a well-known and commonly believed idea. The same holds true here; perception is everything in gaming. The perceived sense of danger in Slender seems to appeal more to the average gamer than the sense of irrationality in The Stanley Parable.

In fact, this is distinctively the “Stanleyist” view on games. The “Buttons” ending in The Stanley Parable is one of the most abrasive and harshly critical attacks against the gaming community that I have seen so far. This ending leaves the player in a heaven-like setting in which they are surrounded by buttons; the ending goes on indefinitely and pushing the buttons causes nothing to happen. The sarcastic setting points out that the gaming community seems to believe that pushing buttons is what is important rather than any narrative or artistic purpose. However, without any sense of accomplishment or narrative progression, player actions in video games quickly break down, losing meaning and appeal. Be assured that this is not just my subjective interpretation of The Stanley Parable, as this is what the rest of the game really gets to the heart of as well. The player needs a narrator to give their actions meaning, and the narrator needs the player to have their story heard. 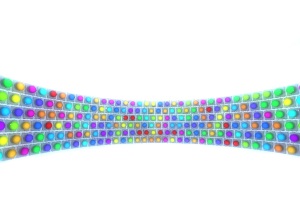 While this new wave of games push the boundaries of gaming and could certainly be considered a new genre or a new movement in gaming, the degree of difference between these games and any others when thought about a little more carefully hardly seems like a different form of media altogether. Remember that, though a game’s atmosphere might not enrapture you, there are plenty of people for which it does. Though a significant number of gamers prefer the atmosphere in Amnesia, I am not alone in finding the quirky nature of The Stanley Parable similarly appealing. And, although many love the interactivity of games like League of Legends, there are also people who prefer the game mechanic of exploration in a game like Dear Esther.

If you want to read more, click here to read about The Stanley Parable and Religion or Existentialism in Dear Esther.

Much has been said of the fragmented narration and ambiguity in Dear Esther.  Traditionally, this has been taken for a more surface-level understand that the narrator’s mind is similarly fragmented.  However, there is more to it than that.  The inherent contradictions in the narrator’s speech and visual metaphors show that Pinchbeck may have had more in mind than just character depth and ambience while writing in these details.  Rather, he presents the player with the existential story of an intellectual discovering the lack of meaning in the world and the uselessness of his own intelligence.

The narrator’s voice is notably flowery.  In fact, I have seen many complaints about Dear Esther as being written in a style that is too “pompous”, “cryptic”, and—yes—even “intellectual”.  In one opening monologue, the narrator describes the island as “a singularity, an alpha point in my life that refuses all hypothesis” (jetty-a).  Using a word like hypothesis in common speech suggests that the narrator is in a field that involves some kind of academic pursuits—a place where “hypothesis” would be commonly used.  References to “singularity” and “alpha point”, which are fairly complex scientific and religious theories respectively, immediately immerse the player in the narrator’s intellectual speech.  Furthermore, the narrator continually cites Donnelly as if he were writing an academic paper and not a letter to a loved one.  In one of the first triggers, the narrator says “Donnelly reports the legend of the hermit” (first climb).  The narrator describes Donnelly’s material as “obscure, the writer’s literary style… even more so” (cliff path-b) which leads the player to believe that Donnelly’s book is a pursuit only an intellectual would take on.

With this understanding, the fragmented narrative and contradictions within the narrator’s own speech give the player a whole new lens through which to look at the story.  As an intellectual man who cannot even make sense of his own words and thoughts, the narrator transforms into a symbol of the failures and inherent contradictions in all pursuits of knowledge.  The narrator even goes as far as to describe “ascribing purpose, deliberate motive to everything” as “delusional” (cliff path-c) which hints at the same existentialist thoughts in the narrator himself. 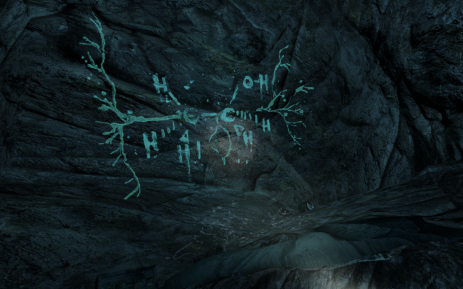 Perhaps most convincingly, the visual metaphor of complex ideas painted onto ancient ruins and cave walls reduce the greatest achievements and advancements in human history, what the narrator calls “the last vestiges of [his] civilisation” (lower valley #2), to no more than cave paintings.  Not only does this image undermine their value to society, but it has also noted that these drawings relate to Esther’s death as one of the images is of an alcohol molecule—a possible cause of the crash. In this case, the player could interpret these paintings as the narrators frustration; we know all of these things and yet none of it could save Esther. 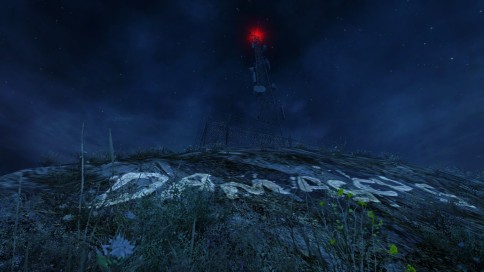 In the second two chapters, the player sees hints that the narrator associates religion and science as both having forsaken him. The majority of the cave paintings are scientific, but in chapter 4, these images climax with a long and large biblical quote.  Taking this in the same light as the scientific drawings, the narrator sees religion as similarly useless in finding answers in the world.  Further evidence of abandonment by all human rationality can be seen in a cave in chapter 4 in which the player finds a boat constructed of car parts and surrounded by candles.  The boat has a notable resemblance to the one the narrator used to wreck himself onto the island.  In this case, the car parts refer not only to the accident but technological advancement whereas the candles give a ceremonial feel to the image.  By using these pieces to create the boat that the narrator used to strand himself on the island, it would seem that the narrator feels that all deeper thought has abandoned him on the island. 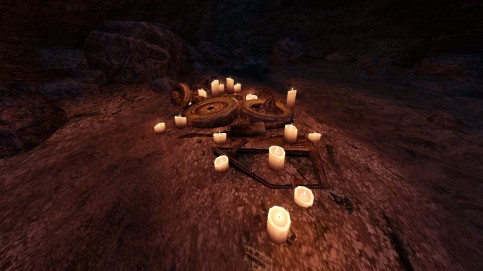 *At a better angle this looks significantly more boat-like.  I would encourage you to check it out in-game.

If these visual metaphors aren’t convincing enough, the narrator specifically notes contradictions in different pursuits of knowledge in the script.  At the “Valley top” in script A, the narrator asks if previous island inhabitants could “walk the bible and inhabit its contradictions”.  This suggests that the narrator has already turned to religion and was disappointed in its inability to lead him to any real answers.  The opening monologue—as previously cited—juxtaposes science and religion in a similar way.  He references “a singularity” and “an alpha point” which are both ideas that theorize that there is a certain point at which human consciousness is not capable of understanding any more than it already does.

*Quotes taken from the full script as released by the Chinese Room.

If you want to read more about Dear Esther, check out some of my other posts: Island of isolation and the Narrator as a Christ-figure.