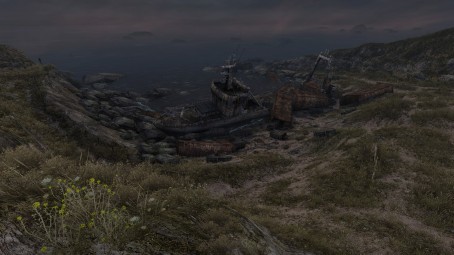 Dear Esther takes place on a Hebridean Island which depending on the interpretation is either metaphorical or a place the narrator strands himself with the intention of committing suicide following the death of his wife.  The player traverses this island and never comes in contact with another human (despite references to other inhabitants).  Furthermore, these inhabitants are referred to as hermits, lonely (like Jacobson), and out of touch (like the shepherds).  The visual text also shows the island’s isolation (and desolation) with crashed and decaying ships surrounding the island.  Thus, the player receives the same sense of isolation that the narrator feels due to the loss of his wife.  These are all things that could likely go unnoticed but, upon further inspection, show brilliance in artistic design.

What did you feel about the isolation in Dear Esther?  What other aspects of this game do you think The Chinese Room did well?  Leave a comment in the section below!

For more on Dear Esther, click here to read about the Narrator as a Jesus-figure or an Existentialist view.

2 thoughts on “Quick Crit! Island of Isolation in Dear Esther”